HERAT, Afghanistan — Defiant Afghan women held a rare protest Thursday saying they were willing to accept the burqa if their daughters could still go to school under Taliban rule.

“It is our right to have education, work and security,” the group of around 50 female demonstrators chanted, waving placards on the streets of Afghanistan’s western city of Herat.

During the Taliban’s first stint in power, before being ousted by a US-led invasion in 2001, women and girls were mostly denied education and employment.

Burqas became mandatory in public, women could not leave home without a male companion, and street protests were unthinkable.

“We are here to ask for our rights,” Fereshta Taheri, one of the demonstrators, told AFP by phone.

“We are even ready to wear burqas if they tell us, but we want the women to go to school and work,” the photographer and artist added.

Afghan women hold placards as they take part in a protest in Herat on September 2, 2021. (AFP)

Herat, an ancient Silk Road city close to the Iranian border, has long been a cosmopolitan exception to more conservative centers, though some women already wear the burqa.

The Taliban, who seized power last month after a lightning military campaign, are in discussions about the make-up of a new government.

They have pledged their leadership will be “inclusive”, but many doubt women will find a place in Afghanistan’s new administration.

“We follow the news, and we don’t see any women in Taliban meetings and gatherings,” said Herat protester Mariam Ebram.

The group have now promised a softer brand of rule, pledging that women will be allowed to work but within the limits of Sharia law. 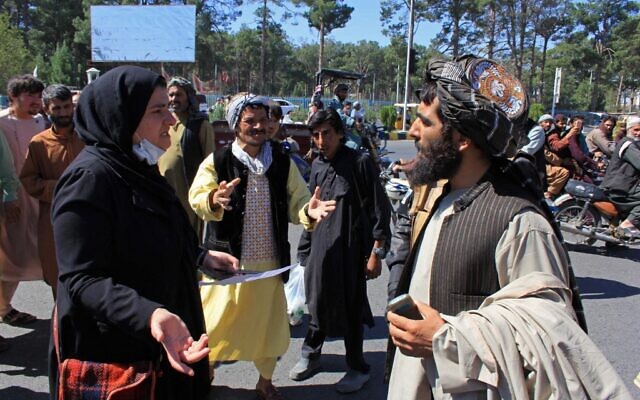 An Afghan woman protester speaks with a member of the Taliban during a protest in Herat on September 2, 2021. (AFP)

The rebranding is being treated with skepticism, with experts questioning whether it will be a short-term bid to seek international recognition and a continuation of vital aid.

“The talks are ongoing to form a government, but they are not talking about women’s participation,” Basira Taheri, one of the rally’s organizers said.

“We want to be part of the government — no government can be formed without women. We want the Taliban to hold consultations with us.”

She described how “most of the working women in Herat are at home,” out of fear and uncertainty.

Ebram said that those who had returned faced resistance from the new Taliban forces in control.

“Some women, like doctors and nurses who dared to go back to work, complain that the Taliban mock them,” Ebram said.

“The Taliban don’t look at them, they don’t talk to them. They only show their angry faces to them.”

Primary school age children including girls have returned to school, but the Taliban says further education is on hold until after the formation of a government.

Protests against Taliban rule were inconceivable during their last reign.

Former government minister Nehan Nargis, speaking to the BBC late Wednesday from Norway where she fled to last month, said Afghanistan had changed from when the Taliban were last in power. 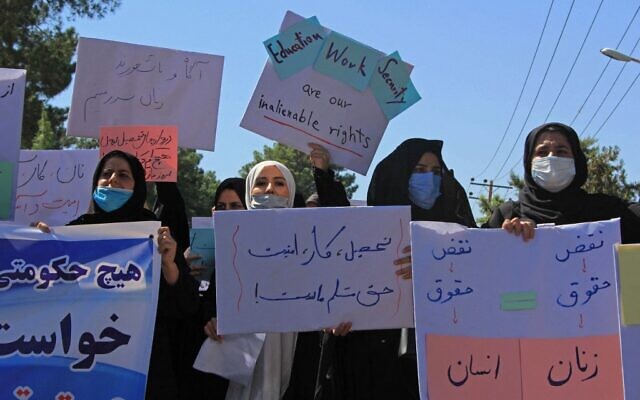 Afghan women hold placards as they take part in a protest in Herat on September 2, 2021. (AFP)

“People are much more aware, they have different aspirations for Afghanistan now, and expectations from government,” she said, noting social media now helped bring like-minded activists together.

“The Afghan people… have collectively raised their voice very strongly using the platform of social media for their issues and causes… and they will continue to use that,” Nargis said.

Basira Taheri said they would continue to protest until their demands were met.

“The women of this land are informed and educated,” she said. “We are not afraid, we are united.”

Herat’s demonstrators said they hoped their example would inspire others across the country.

“We will continue our protests,” Basira Taheri said. “We started it in Herat, it will soon expand to other provinces.”


The Climate Crisis and Responsible Journalism

As The Times of Israel’s environment reporter, I try to convey the facts and science behind climate change and environmental degradation, to explain – and critique – the official policies affecting our future, and to describe Israeli technologies that can form part of the solution.

I am passionate about the natural world and disheartened by the dismal lack of awareness to environmental issues shown by most of the public and politicians in Israel.

I’m proud to be doing my part to keep Times of Israel readers properly informed about this vital subject – which can and does effect policy change.

Your support, through membership in The Times of Israel Community, enables us to continue our important work. Would you join our Community today?


Join the Times of Israel Community

Already a member? Sign in to stop seeing this


You’re serious. We appreciate that!


We’re really pleased that you’ve read X Times of Israel articles in the past month.

That’s why we come to work every day – to provide discerning readers like you with must-read coverage of Israel and the Jewish world.

So now we have a request. Unlike other news outlets, we haven’t put up a paywall. But as the journalism we do is costly, we invite readers for whom The Times of Israel has become important to help support our work by joining The Times of Israel Community.

For as little as $6 a month you can help support our quality journalism while enjoying The Times of Israel AD-FREE, as well as accessing exclusive content available only to Times of Israel Community members.

Already a member? Sign in to stop seeing this

Training owes rather a lot to folks. However the place do their rights start and finish?

You may have missed

Training owes rather a lot to folks. However the place do their rights start and finish?

How a 30-team SEC would resemble faculty soccer’s previous

23 hours ago Charles Martin
We use cookies on our website to give you the most relevant experience by remembering your preferences and repeat visits. By clicking “Accept All”, you consent to the use of ALL the cookies. However, you may visit "Cookie Settings" to provide a controlled consent.
Cookie SettingsAccept All
Manage consent

This website uses cookies to improve your experience while you navigate through the website. Out of these, the cookies that are categorized as necessary are stored on your browser as they are essential for the working of basic functionalities of the website. We also use third-party cookies that help us analyze and understand how you use this website. These cookies will be stored in your browser only with your consent. You also have the option to opt-out of these cookies. But opting out of some of these cookies may affect your browsing experience.
Necessary Always Enabled
Necessary cookies are absolutely essential for the website to function properly. This category only includes cookies that ensures basic functionalities and security features of the website. These cookies do not store any personal information.
Non-necessary
Any cookies that may not be particularly necessary for the website to function and is used specifically to collect user personal data via analytics, ads, other embedded contents are termed as non-necessary cookies. It is mandatory to procure user consent prior to running these cookies on your website.
SAVE & ACCEPT